Windfarm in the Baltic Sea

Again Van Heck contributes to a huge wind farm project; Kriegers Flak in the Baltic Sea, approximately 25 kilometres off the Danish coast. Where the foundations are normally driven into the seabed (piling), the foundation is vibrated into the seabed. This has everything to do with the many porpoises there. Piling can harm the fish, so an animal-friendly solution with monopole foundations was chosen.

The deeper one gets into the seabed, the more hard clay one encounters. This clay can cause the monopile to get stuck. The red pumps from Van Heck then offer the solution.
In the event of getting stuck, the Van Heck pumps can be used to reduce resistance and remove the clay / sand from the monopile.
A complete spread including piping will be delivered and will be standing,  fully stand-by, on the deck of the ship throughout the entire project. The arrangement is ready to start up so that the work does not come to a standstill.
Van Heck will supply two hydraulically driven pumps ( VSPH400) which are connected in parallel to a diesel-powered HK400. Additionally, two VSPH400 sets with a diesel-powered split case, which are connected parallel in series, will be installed. The entire arrangement is clearly visible on the drawing.

The equipment will be transported at the end of June and is expected to be in use for approximately three months. 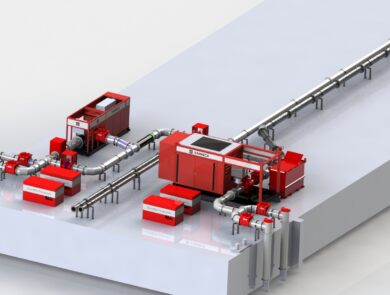 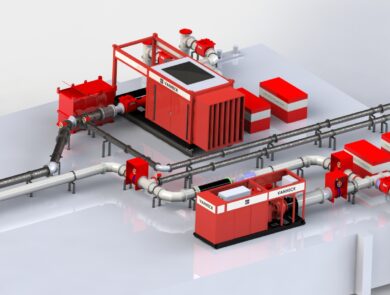