On a Saturday Mid-March we received a telephone call. In Den Oever a buoyancy chamber  of a dry dock had sunk. Our client called in Van Heck for a solution.

The buoyancy chamber consists of two hulls of a cargo ship. Between the hulls there is a platform with which ships can be lifted out of the water. Originally the load capacity of the lift was 350 tons, but due to years of wear and tear the capacity had decreased. That weekend, with extremely low tide, the buoyancy chamber, holding a 250-ton ship, sunk and the hull “got stuck in the sludge”.

Initially Van Heck received the message that approximately 750 cubic meters of water must be pumped out of the buoyancy chamber and that the wear to the hull was minimal. A VSPH400 pump with a flow rate of 1400 cubic meters per hour should be sufficient. With low tide the upper deck should be released from the water. Sunday at the end of the day, Van Heck had her equipment on site and pumping out of the buoyancy chamber could proceed. Unfortunately the opposite happened; the wind turned direction and the water in the harbor was driven up. To make matters worse, the wear on the hull turned out to be more than expected. Van Heck advised to have a diver inspect the hull and, where necessary, repair it immediately.

Successfully on the dry again

On Monday morning at nine o’clock another phone call came from the client to report that the diver had done the necessary repairs but the chamber was still under water. In Noordwolde, a second VSPH400 with power pack and ancillaries was prepared for transportation to Den Oever. On Wednesday our client wanted the complete installation ready by the end of the day, so, with low tide, they could try again. At half past five the two pumps were started and the water in the buoyancy chamber dropped rapidly. By moving the hoisting mechanism back and forth at the same time, the hull was released from the sludge. After approximately one and a half hours of pumping, the hull of the buoyancy chamber had resurfaced. The pictures on the left give a clear picture of the “before and after”.
Result: a satisfied customer who, thanks to Van Heck’s prompt action, could continue with the business activities. 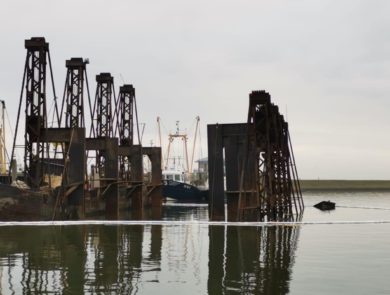