Heavy rainfall had resulted in high water levels in the Horstermeer Polder northwest of Hilversum. Van Heck was called at 11:00 p.m. on Sunday, 13 October 2013. Two hours later, a Van Heck employee was on site to evaluate the situation, and at 8:00 a.m. the pump, pipe work and crane were ready for installation. By noon, the HK500 pump was up and running and the mechanics could go home.

Tuesday evening the phone rang again. This time, there was a problem at the Pondskoeker Lock. Here, the installation of the electrically driven VP800 pump brought in from Noordwolde started at 3:00 a.m. and was in operation at 8:00 a.m.

But the day didn’t end there. Waternet asked to have the HK500 relocated from the Horstermeer Polder to another lock, Sluis ’t Hemeltje. No sooner said than done (after an on-site assessment, of course). By 6:00 p.m. the pump was running at its new location and soon had the water down to an acceptable level. 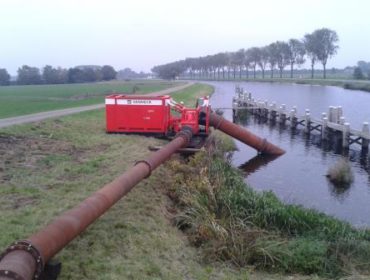