Water board calls upon Van Heck

AMELAND – Ten thirty in the morning, January 4th. The phone rings in the Van Heck offices in Noordwolde. Wetterskip Fryslân, the water board of one of the northernmost provinces in the Netherlands, reports that parts of the island of Ameland are about to flood. Because of the high water levels, the land cannot be drained into the Waddenzee. The weather forecasts predict heavy rainfall. The situation is getting serious. Director Jeroen van Heck is aboard the first boat to Ameland to analyse the situation and to prepare the job thoroughly. At home in Noordwolde, the equipment is already being prepped for departure.

Aboard the very next boat, the Van Heck pumps arrive on the island. The two HK500 pumps have to be set up in the middle of the night, in foul weather. A strong gale is blowing, and hailstorms add to the rain pummeling Van Heck’s men, but come dawn, the pumps are running. The pipes go over the dike to the Waddenzee. Within a day, the water level in Ameland’s boezem (the drainage polder outlet) has been lowered sufficiently. Meanwhile, however, things are going wrong across the Waddenzee on the mainland. In Lichtaard, near Holwerd in Friesland, a pumping station breaks down. Another two Van Heck HK500s are dispatched to that location.

During the night, Jeroen van Heck calls his co-worker in Lichtaard several times. The first pump has been set up and is working hard, but the circumstances are so dangerous in Lichtaard that placing the second pump becomes too risky. Taking safety into consideration, they decide that the HK500 that is already in place will have to do the job alone. The next day, everything looks brighter: Ameland’s boezem is safe again and the Van Heck pump in Lichtaard is in command of the situation there. ‘In emergencies like these, it saves a lot of precious time if you have a contingency plan ready’, says Jeroen van Heck. ‘Last year, the Wetterskip Fryslân consulted us. Because of that, we knew exactly what we needed in case of an emergency.’ Van Heck is not just an internationally acclaimed expert in water management. There are only a few companies who can deploy heavy equipment in such a short time. Because of this, Van Heck is an outstanding partner in drafting contingency plans. 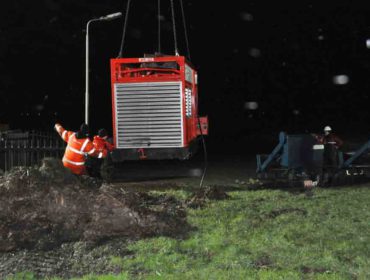