BASF in Ludwigshafen (Germany) is thirsty – very thirsty. The enormous installations at the largest chemical factory site in the world need 160,000 m3 water per hour in order to stay cool. This water is taken from the Rhine, but last September the water level had dropped dangerously low and emergency measures needed to be taken. At that moment Van Heck was called in and everything started to move very rapidly indeed. In the record time of eight days the largest temporary pumping installation ever was built with a capacity of 116,000 m3/hour. Below you will find extracts from the log that not only reads like an exciting boy’s book, it is also illustrative for Van Heck.

A telephone call from RISC: pumps are needed in Germany for approx 8,000m3/hour of cooling water at 3 bars (30 meters). Four pumps selected which need to be placed onto pontoons. Verbally quoted the rates.

Order received. Specific sketch of the situation is required. The request is made to deliver the pumps as early as Saturday, which is no problem for Van Heck.

Contact person at BASF Ludwigshafen is known by now. Apparently, each pair of pumps needs 100 meters of pipe, that is all we know. BASF disposes of a lot of different pipes and valves themselves, further discussions needed.

The BASF Werkfeuerwehr (fire brigade) yard reports: difference in height 2 – 3 meters and suction height 2 – 3 meters, thus in total approx. 5 meters instead of 30 meters. Approx. 20 meters piping to open basins – later these appeared to be the inlet channels of the cooling system. It is agreed that Jeroen van Heck will travel to Ludwigshafen as soon as possible to personally have a look at the situation. Half an hour later the Feuerwehr (fire brigade) calls again: for the time being there is no immediate need to start pumping tomorrow straight away, besides, the engineers will not arrive until 10 o’ clock in the morning. Company details are exchanged by fax. Jeroen van Heck packs for 2 -3 days and drives to Ludwigshafen that very night.

After a quick breakfast and a shower Jeroen van Heck appears relatively fresh at the meeting at 10 o’ clock. It soon turns out that the situation is substantially different than previously assumed. The water only needs to rise by 0.5 meters (instead of 30 meters) – situation viewed on site. Advice: two VP800 pump units to be placed in the Rhine in front of the inlet channels to pump and move 16,000m3/per hour. This is agreed upon there and then.

Then things start to move quickly. Each Van Heck employee in The Netherlands is called up and put to work. At 14.00 hours an additional request is made to reserve another 25,000 m3/hour. Two locations are measured and the pumps selected. Meanwhile a lot of work is done in The Netherlands. Pipes and corresponding gaskets, bolts and nuts are loaded up and the lorries depart. An additional problem is that no lorry traffic is allowed to take place in Germany between Saturday evenings 22.00 hours and Sunday evenings 22.00 hours. Via BASF and the German police exemption is granted and the lorries drive in convoy through Germany.

On the banks BASF prefers to work in daylight. Alarming message: the water level in the Rhine subsides quicker than anticipated. A request is made to immediately bring in the reserved pumps with the aforementioned capacity of 25,000m3/hour and to reserve another 50,000m3/hour on top. The arrangement of the pumps are passed on by telephone to Noordwolde. There the drawings and packing lists are prepared. At the end of the afternoon the first two pumps are set up and early in the evening they have been connected by the BASF electricians and the two units are put into operation.

Lorries with the next four pumps are already waiting at the gate. A new BASF fire brigade team has arrived, which is swiftly settled in of the situation by us. With this team we start installing two VP800’s. A diver inspects the bottom and reports that there are a lot of big rocks. A crane on a pontoon is arranged for and removes many tons of rock, we subsequently place the pumps which are operative that evening.

While our supervisors continue to prepare the two pump locations non-stop, the people of BASF work at full strength to gather the necessary pontoons and partitions.

The Rhine subsides slower than expected. Still no one feels easy about it.
Decisions are taken and the solutions to the different locations are now known and final. In The Netherlands work is progressing steadily bringing together a number of pumping units with a capacity of in total 116,000m3/hour. It is starting to sink in that a temporary pumping installation like this has never been done before.

We are given a bit more breathing space as the Rhine is subsiding slower than expected. Pontoons arrive and the pumping units are set up.

The setup was progressing well till some breaking news came through: there is a bomb between the dredged up rocks. Work is stopped immediately and experts arrive on the scene. On closer inspection it turns out to be a boiler. We can resume work. Meanwhile it has emerged that the approx 116,000 m3/hour of pumps, which have been assembled in Noordwolde and are on stand-by, should be sufficient, no more capacity will be needed. The last six lorries are loaded up and leave The Netherlands. At the same time the final touches are put to the installation drawings which are sent by fax in the evening, as well as a spare list, flange specification and the last packing lists.

There are three cranes. The first crane unloads the lorries, the second crane places the pump units onto the pontoons. The third crane is used to assemble the different pipe parts. Sunday afternoon everything is ready to be shipped.

Test running the 1st pontoon and measuring sound. All is according to plan.

There is a margin left of 60 cm for the running pumps. This means that the water of the Rhine can subside to a level far below the lowest level ever recorded. The BASF people receive instructions from the Van Heck team how to handle the equipment. The connection to the shore is made.

All aspects are ready in time for tomorrow’s test. Since the level of the Rhine is rising slightly at the time, all 23 pumps are put on stand-by. It is an impressive sight.

Because the level of the Rhine subsides slower than anticipated, it looks as if we have gained a few days. This was rather convenient, the pipeline division indicate they will not to be finished in time. Then another major moment arrives: from 14.30 hours all pumps are started up one by one. This is done at a steady pace and is executed by the BASF team themselves, under the instructions of our own supervisors when necessary. There are no problems, the work is nearly done. At 16.30 hours the last unit is switched off again and everyone returns home a little tired, but satisfied and proud. The largest ever pumping installation is ready, tested through and through and ready for use. Geared to supply the machinery of the largest chemical factory in the world with cooling water. A masterly example of water management to be proud of.

The (trade) press got wind of it too of course and writes full of praise about “The Dutchies”, who quenched the enormous thirst of “their” BASF. It later developed that the level of the Rhine would normally have been 2 to 3 meters higher. When the pump units were started up, only a spine-chilling tight margin of a mere 6 cm was left – thus only just in time. 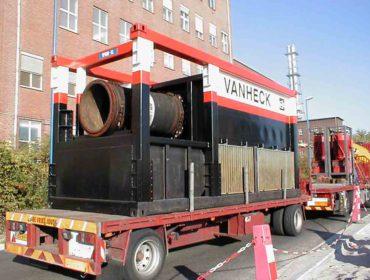