The water canal runs through the station area in the centre of Delft. The canal must however be blocked and filled temporarily for an ambitious railway tunnel construction project. The canal is one of Delfland District Water Control Board’s main arteries, which means that it plays a crucial role in local water management. In other words, an ideal job for Van Heck’s PLC-controlled system.


PLC stands for Programmable Logic Controller, a container with advanced control equipment and computer technology and automated operating and control software that Van Heck developed and built in-house. The container is also supplied with air-conditioning and heating, as it is, after all, a control room in which the computer must be able to operate throughout all four seasons of the year. The water levels are measured and the pump’s RPM determined based on water-level differences. If the water stops flowing for a few days, the pump kicks in to do the necessary flushing. This is done during daylight hours, because, even though the electrical VP800 is extremely silent, Van Heck always takes the local environment into account.

There isn’t very much space there, and a number of companies are in the process of building the tunnel, so it’s important to ensure that Van Heck’s one-metre diameter pipes don’t get in anyone’s way. And that demands extremely meticulous preparations and collaboration with the construction partners, ‘Combinatie CrommeLijn’. They asked for two pipelines, so the water could be pumped in two directions. It was however possible, thanks to some innovative thinking, to lay one pipe with some valves and smartly innovative control systems that not only saved space, but also yielded major savings.

The project started in January 2011 and will continue until approximately June or September 2013. The two pumps on either side of the pipe have a capacity of 10,800 m³/hour and are run with PLC-controlled frequency converters. 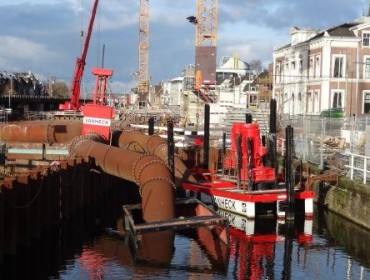 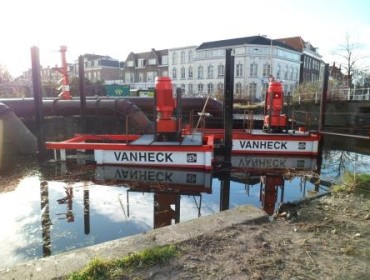