One of Van Heck’s longest-running projects is nearing completion. For almost four years, the professionals from Van Heck have been involved in an immense ballast operation in Baku, Azerbaijan, also known as ‘the Land of Fire’. Float-over operations carried out on behalf of Saipem, were completed thanks to the improvisation capabilities and, of course, the expertise of Van Heck.

A few years ago, the experts of Van Heck were called in for the first float-over operation off the coast of Baku. Despite the tremendous time pressure, Van Heck achieved a world first by integrating the Dynamic Ballast System into the Centrally Controlled System. This enabled four inlet valves located on the side of the pontoon to be controlled separately from one another. These ‘controlled pumps’ not only allowed work to be carried out more quickly, but also the control during the installation of the deck was optimal. The innovative method ensured that the oil platform stood as solid as a rock.

This was no easy task, centimetre precision was required in order to install the deck, which weighed in at 15,600 tonnes, as it was transported on a gigantic pontoon and then onto the waiting piles. The team that flew in from the Netherlands was not only showered with compliments, their success resulted in an order for the installation of a further five decks. These tests of strength were also carried out successfully enabling critical times to be reduced significantly. The first operation took approximately three and a half hours, whereas two hours and twenty minutes was later more than sufficient to drop the gigantic structure into place.

In Baku, Van Heck demonstrated again and again that it was continuously prepared to take on the biggest challenges. Expertise, the art of improvisation, immense technical skill and daring to innovate guarantee the successful completion of the most complex ballast operations, wherever you are in the world and whatever the conditions. 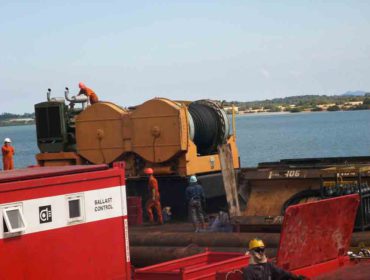