‘This was the largest mobile pumping operation of all time.’ Jeroen van Heck utters these words with the modesty we have all come to expect from him. He makes it sound more like a dry fact than an enormous achievement. But he is proud of his company, that in the howling winds, rain, hail and snow, helped to relieve the floods in Somerset.

Somerset, early in February 2014: Jeroen van Heck is in the region already hit by floods for weeks resulting from continuing bad weather. He is speaking with the Environment Agency about what kind of solution Van Heck could offer. It’s still a budget question. Then Prime Minister David Cameron announces the availability of disaster funding. Van Heck receives the assignment almost immediately, and the first pumps are on their way to England within a few hours: a convoy of 30 lorries loaded with the equipment needed for the job ahead.

Jeroen: ‘They arrived early in the morning on the wrong side of the floods, but this problem was solved by driving the Land Rover ahead of them to guide them over a narrow road that was partially submerged. Our equipment actually arrived on site from the Netherlands before the local crane! But as soon as we got there, the next storm hit and made it unsafe to use the crane. That’s why it took a couple of days for us to really get everything rolling. It then took two days before the water level started to drop, but we had to keep pumping for weeks to get rid of everything.’

We set to work with the regional contractor who would supply the personnel and Van Heck would provide the pumps. This meant having a total of four men from Van Heck at various locations in Somerset in addition to dozens of locals. These workers had to ensure a good foundation for the pumps, the laying of the pipes and pits for the suction pipes. Jeroen: ‘Local ladies kept bringing us pies for lunch – we were well looked after. One of our staff even received a cake on his birthday with “Happy Birthday, Daan” written on it in Dutch. It’s experiences like this that make our work so gratifying.’

Somerset gets its name from its earliest inhabitants: people settled there during the summer but had to leave for the winter when it became too wet. During the 17th century, the Dutchman Cornelis Vermuyden drained the area to make it a polder. Retention polders designed to contain floods were a part of the system. Later, a bypass was built next to the River Parret to allow for the faster drainage of floodwater. But this time, rainfall was so extreme (and according to the local population the cause was a lack of maintenance dredging) that this bypass’s underpasses were too small, and the drain at the end of the bypass could not handle the incoming quantity of water. Some villages were already under water and even the town of Bridgwater was threatened. Van Heck installed pumps so that water that was not getting through the bypass fast enough could be pumped around them and past the drain complex into the river near the sea. 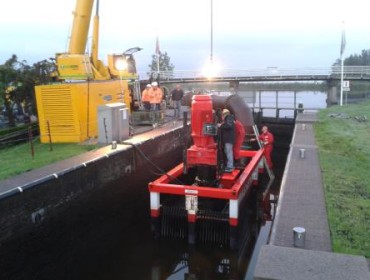 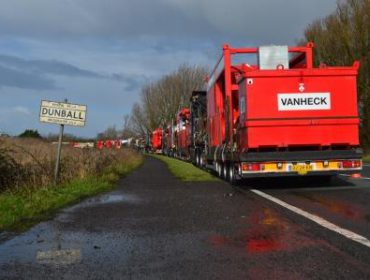