They acted quickly and determinedly this winter in France; manpower and equipment from Van Heck BV. Their mission across the border? To offer help to a nuclear station with cooling water problems, on the Loire river, not far from the well- known city of Tours. The power station would become completely dry if action was not taken swiftly…

Only one of all the inlet pipes for cooling water from the Loire was still functioning, the others had become blocked due to accumulated sand. Result: insufficient supply in their own water-retention basin resulting in a drop of the water level to an alarming level. Water that is also required to be able to shut down a reactor in emergencies. So it was high time to involve a team of trouble- shooters.

When the French lease company Phocomex sounded the alarm on 28th December 2005, the team of those who were to deal with the situation was ready immediately. Phocomex is an old acquaintance, who had already brought in Van Heck for earlier disasters. Just like when the serious flooding around Nîmes occurred (at the end of 2003), everything was mobilized internally for departure in no time. Equipment was selected and rough calculations were made of the pumping capacity required for this specific situation.

Van Heck’s men were on stand-by on 29th December, ready for the job. But they had to wait. Electricité de France (EDF) itself provided a short holdup by delaying the mobilization until after the costly holidays. The patience of the Dutch was tested. In the meantime, there was a great deal of telephone traffic with France about the piping and bends required. The trucks were booked and the engineers were rounded up.

‘React flexibly in that kind of situation’

It was not until after the New Year, on 2nd January, that the go-ahead was given and concise sketches of the situation rolled off the fax from the south. Plans were revised, calculations were adjusted. ‘In that kind of situation you have to be able to react in a flexible manner’, states Jeroen van Heck. He set off that day for the nuclear power station with two engineers, following the first of the trucks filled to the gills.

It was not all plain sailing: cumbersome procedures meant a lot of delays in acquiring the access passes. Despite lengthy waits, cranes arriving with insufficient tonnage, generators that arrived too late and pipe supports that had to be modified on site, Van Heck did not allow itself to be defeated. The discharge into the cooling water reservoir was moved to a less risky location. In total, 18 trucks from various hauliers from Friesland brought in the necessary equipment.

‘Industry has to remain alert’

Jeroen van Heck says determinedly: ‘We frequently encounter these kinds of problems; sometimes not enough priority is given to proper or properly functioning water systems. When a number of years have passed by without any problems, one sometimes forgets that one is dealing with Mother Nature. The situation is therefore unpredictable and that is why it is important to keep alert. Not to delay acting until it is already too late, but to have interim checks carried out or to allow us to draw up a disaster plan. That is how you can avoid significant financial damages and reduce risks for your clients.’ 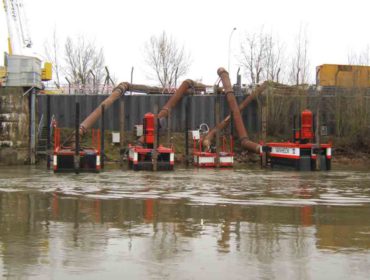