The people of Dannenberg keep their feet dry

Nine sets of pumps on site in eight hours time

A little south of Hamburg, in the state of Niedersachsen, the small town of Dannenberg is situated. At the end of the summer of 2002 the Jeetzel river is on the brink of overflowing its banks and completely flooding the town. Van Heck is summoned to try and prevent a disaster and within eight hours ten lorries with pumping units are on the scene.

The dikes were in a critical condition. “The dikes consisted of sand and turf – should the water break through the saturated dikes, matters would become irreversible and Dannenberg would be lost beyond redemption,” words from Jeroen van Heck whilst looking back. It is the first time that Van Heck’s pumping units would be deployed for preventative purposes: normally flooded areas are pumped dry, in Dannenberg it was a case of preventing this scenario.

Together with the emergency team on site Jeroen van Heck, who had travelled ahead, took stock of what was required and what needed to be done at the time. He informed his people in Noordwolde by fax and within 8 hours there were ten lorries with pumping units waiting at the gates of Dannenberg. Apparently the Germans were taken unawares by this speed and drive, since the sheet piling which was necessary to stem the Jeetzel, was far from ready. The Van Heck engineering team was left with nothing else to do than making the necessary preparations. When the sheet piling was finally ready at 04.00 at night, the first pumps were installed and started working a little three hours later. Nine pumping units were eventually installed which together spouted as much as 11,000 litres of water per second (!) over the sheet piling. The water level at the Dannenberg site started to drop rather quickly, then more steadily, and the inhabitants heaved a sigh of relief. Dannenberg would keep dry…

On this occasion too Van Heck received some excellent press reviews, but the kindest words were written by the mayor of Dannenberg in a emotional personal letter of gratitude to Van Heck. 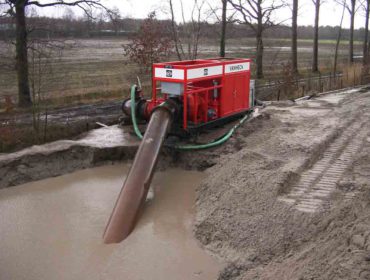