Surgical precision with 20,000 tons on the open seas

Only three centimetres of play

Imagine this: a 180- by 45-metre pontoon on the open seas, carrying a 20,000-ton oil platform suspended above the support columns that will keep it in place. Van Heck’s job in this type of operation is to make sure that the enormous platform ends up exactly on the support columns. This is an operation that demands surgical precision, and Van Heck has developed a technique that helps to make it possible. And it already did so way back in the 80s!

In July 2013, Van Heck and Saipem – an Italian offshore installation contractor and long-term partner – will install the deck in the Caspian Sea. Technical facts: VSPH400s pumps (each with a flow rate of 1,400 m³/hour) with power packs and a central control cabin will get the job done.

Does it still make sense to refer to something as innovative if it was invented more than 25 years ago? It certainly does if you’re still able to profit from its benefits today, and if the innovation has been systematically modernized over the years. In the past, the decks could only be installed under extremely calm maritime conditions, and even then it was an extremely daunting task to undertake. Until, that is to say, Van Heck levelled the playing field by introducing a novel system consisting of pipelines across the pontoon’s deck and a pump in each individual compartment: the pontoon could thereby be kept stable by pumping water back and forth through the system. Van Heck succeeded in keeping the colossus level within a range of only three centimetres!

The actual lowering takes place in a very short period of time: Once the pontoon is in place and floating between the support columns – also a super high-precision job that Saipem does – the two operators take over the rest of this painstaking job from the central control cabin. One operates the system, while the other checks the continuous stream of computer calculations. Van Heck purpose-built the software for the system, but the applicable data are entered for each individual operation and the control panel is also customized for each new situation.

Reliability thanks to a smart trick

Van Heck has come up with a smart trick that our customers find extremely appealing for the simple reason that it saves them time, and therefore also money: while other providers hang their pumps at the bottom of the pipe, Van Heck has devised a way of placing the pump inside the pipe. Jeroen van Heck: “If anything goes wrong with the pump, we simply hoist it up with a little hand-winch, and lower in a replacement pump. It’s a quarter of an hour’s work instead of possibly a whole day using one of the other systems!” That’s one good reason for customers to go for Van Heck.

Jeroen is completely nonplussed when he says: “Yes, a 20,000-ton deck is kind of heavy. No more than ten of those are made worldwide in any given year. We’ve worked with them in sizes of 13,000, 15,000 and 16,000, but also 21,000 and even 28,000 tons. Huge jobs like those are always enticing, because there’s something special about them every time. The water of the Caspian Sea – an inland sea – is nowhere near as salty as the Mediterranean Sea, so you obviously work with different masses: if you forget to adjust the related data in your computer, you’re going to have a major problem on your hands. You’ve got to stay sharp all the time!” 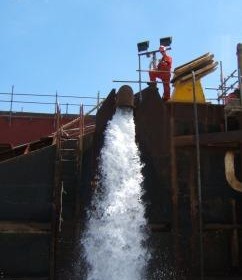 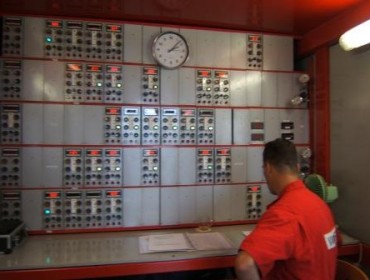