Siphon systems: why not?

AARLE-RIXTEL – In the sewage plant in Aarle- Rixtel, Van Heck’s siphon systems are being used so that the water board can have the sewers renovated. Siphons are exceptionally well-suited to this job, because an altitude difference is required for correct siphon operation.

Van Heck’s siphon systems are broadly used and have a number of advantages over regular pump systems in certain projects. A siphon system consists of fewer moving parts, leading to even fewer failures than pump systems. In Aarle-Rixtel’s sewers, for example, the vacuum pump only turns on when gas builds up in the pipe. The siphon uses much less energy than a regular pump, especially in projects where long and continuous operation is required. In addition to this, siphons are nearly soundless, which makes them perfect for use in populated areas. The system consists of three vacuum pumps. Normally, only one is in operation with intervals. When the third pump turns on, it emits a cell phone alert. This triple safety ensures an uninterrupted process. Jeroen van Heck believes he knows why siphons are not as widely used as regular pumps. ‘The option does not easily occur to people. You can create a difference in altitude almost anywhere, so siphons can be used much more often than you would think.’

Van Heck delivers its equipment tailor-made. Naturally, that goes for siphon systems as well. Because of the low energy consumption and noiseless operation, a siphon is a perfect green solution. ‘If you can complete a project with siphon systems, why would you use diesel pumps?’ asks Jeroen van Heck. ‘It does not take long to recover the higher installation costs. 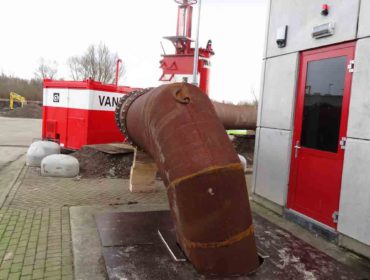