Siphons by Van Heck prove their worth from Europe to Asia.

Those who paid attention in their physics class will know how stunningly simple it is: siphoning. Tapping a liquid from point a to b, based on the difference in height between the inflow and outflow of the siphon pipe. The principle works the same on a larger scale, however with more power and knowledge. A solid system of pipes with vacuum kettles and slide valves takes care of the rest.

At Van Heck they know the tricks of the trade. Tried and tested in this relatively new technique, the list of references of successful projects in Europe and Asia is already awesome. For instance, a pair of siphons functioned for smoothly 2 years in Hong Kong and assistance was also rendered at several German sewerage renovations. During the construction of the high speed rail link (HSL) in the heart of Antwerp, Van Heck took care of a temporary diversion of the sewerage with a capacity of as much as 7,200 m3 per hour. A complicated job at our southern neighbour.

But in our own country the expertise from Noordwolde is also gladly used. Examples are the sewage purification plant Houtrust in The Hague (a giant pipe over an asphalt junction) or the Hoogovens plant (Corus) near IJmuiden; here Van Heck installed three siphons and five pump units during the renovation and inspection of the central sewerage. That combination added up to an impressive total capacity of 28,800 m3 per hour. Obviously, those kinds of successes do not remain a secret. Over a year ago, Van Heck was commissioned to install two siphons (each with a 1,000 mm diameter and a capacity of 4,000 m3 per hour) in the dune landscape near Scheveningen. Thanks to this installation, the supply of pure drinking water is guaranteed in the coastal region. For good reason, in professional circles the Van Heck-siphon is also called the Rolls Royce for sewerage jobs. A solution for ‘high quality’ water supply. It requires little maintenance and is environmentally friendly, since energy consumption is negligible: the siphon takes over all efforts from the pump and proves to be a thrifty tool, because the engines do not have to run continuously. That saves wear, noise pollution and especially fuel costs! Around 13kW in comparison with a pump with a 500kW engine.

Besides, the soundproofing is striking (a 54 dB level at five metres distance) so that the siphon pipe is actually interesting as a ‘whisper system’ for operations in residential areas or in vulnerable nature reserves or sanctuaries. Since it is equipped with three electrically driven vacuum pumps, the siphon is a reliable element. Moreover, the technique can be applied at the most diverse construction sites: from installations for water purification to renovation projects and temporary diversions of watercourses. 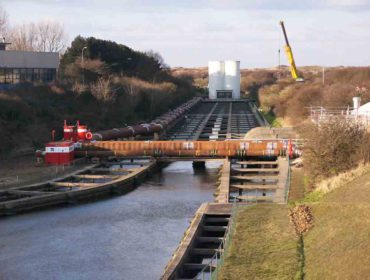