The Sea Trophy is the first complete mobile pumping system that can extract oil from ships in a simple and controlled manner after refueling with incorrect fuel, when a ship is stranded or in case of calamities at sea.
In this article we would like to tell you more about the renewed Milkcan application.

The Sea Trophy can be used with the Milkcan as a stand-alone device in bunker tanks or cargo tanks.
This Milkcan fits through a round hole with a diameter of 200 mm and enables pumping from a manhole, hatch or a borehole. In this way, fuels and oils can be secured simply and efficiently.
The pumping capacity of the Sea Trophy is 70 m³ / hour at 3 Bar (viscosity: 100 sCt). Whether you use the pump for salvage work, maintenance work or for emergencies during oil production, we offer you the specific, customized configuration of the pump.

The Sea Trophy can of course also be used in conjunction with a seal, in which the whole can be inserted into the pipe system of the ship. This allows the fuel to be pumped in a controlled manner.

More information about the Sea Trophy can be found here. 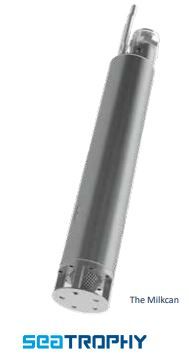