EZUMAZIJL – Van Heck was able to prevent the north-east of Friesland from flooding after a pump failure at pumping station Dongeradielen. Following the swift installation near Ezumazijl of three mobile pumps – an electrically driven VP800 and the HK500 and HK700 super silenced diesels, the optimal emergency pumping station was ready for action.

The Friesland Water Board

Van Heck’s temporary pipelines discharged the water from the Frisian ‘boezem’ (the main reservoir system of rivers and canals) directly into the lock on the Lauwersmeer. Aware that the wettest period of the year was right around the corner, the Friesland Water Board was unwilling to take any chances. They ordered Van Heck to construct her emergency pumping station under the condition, it had to be ready before the weekend and the expected heavy rainfall. The pumps were operational within 24 hours, and the system operated for 6 weeks. 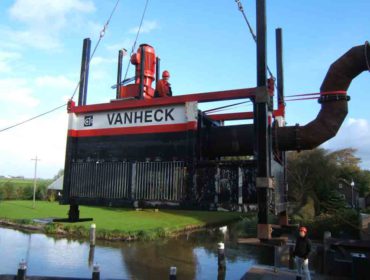