In severe winter weather on the Baltic Sea

Pumping in snow and ice

SAINT PETERSBURG – Russia is carrying out major infrastructural improvements in prepara- tion for higher sea levels caused by accelerated melting of the ice caps. A storm surge barrier is being built in the Neva estuary to prevent flooding of the protected delta, which includes the metropolis of Saint Petersburg. Royal Boskalis Westminster assisted with the construc- tion of a motorway tunnel and called in Van Heck to handle the extraction of excess process water. A challenging job, due, in part, to the extreme cold.

Since last spring, Boskalis and Van Heck have been working together in Russia. The Netherlands have a long established well renowned reputation in the dredging industry and with the battle against the rising water. Van Heck has worked together with Boskalis for years, handling their pumping activities for dredging operations throughout the world. For the pump specialist it is the second project in Russia, a promising market that is slowly opening its doors to West European companies. In the estuary, that includes Saint Petersburg, a world heritage site, Boskalis assisted in the construction of kilometres-long dikes on both sides of the storm surge barrier, under which a tunnel had to be built for new motorway which runs along the sea wall. Heavy diesel locomotives close the storm surge barrier doors when high water levels are expected in the Baltic Sea.

Once the concrete tunnel was in position, it needed to be covered with sand. The water used to transport the sand through piping had to be pumped back. Van Heck was entrusted with the task of pumping off this water in rapid tempo. Extreme cold and heavy ice formation periodically brought the work to a halt. In anticipation of this, Van Heck had fitted the equipment with automatic drain valves. A wise decision, after the basin had been pumped dry, the pipes and pumps were automatically drained to prevent freezing. The Frisian company can always provide back-up. Van Heck is one of the few businesses that has software that is capable of reading the data out of the pump motors. This increases the efficiency. Ultimately it took six weeks to deliver all the sand needed to cover the tunnel. Thanks to thorough preparations and the successful handling of this project, Van Heck increased her chances of being brought in for future projects in the north-west of Russia. 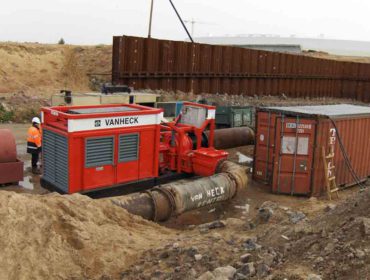