Van Heck has grown to be a true specialist in “load-outs” and “float-overs” or in other words ballast systems. These are highly complex operations during which very large floating pontoons (visualise a fewl football pitches) or decks are meticulously kept “in balance” by means of pumpinginstallations, so that during the loading and unloading process – which can often last for hours – a completely even and rigid floor is created. What is loaded and unloaded? A production platform of 16,300 tons for instance.

During load-outs decks are loaded from shore. During the past twenty years Van Heck has gained a lot of experience in this field as well. We would like to highlight two examples. The first one involves the second largest deck in the world the CTOC CKP deck of 16,300 tons in Samsung Yard, Koje Island in Korea. The difficulty during these types of ballast operations is the combination of the tide, weather factors and the incredible, constantly changing pressure of the slowly moving load. This requires a balanced system of linked pumps that meticulously regulate the water level – and thus the counter pressure – in the pontoon. These types of load-outs often take 6 to 10 hours, the preparation for it about 1 year!

A second project was realised in Johor, Malaysia and involved the Helang HCP deck of 9,200 tons. On the stock are two decks in Azerbaijan of each 14,5000 tons and meanwhile we can report that options on four more float-overs have been obtained, which are to be under Van Heck’s full supervision.

Van Heck has added to its speciality of load-outs the techniques of float-overs by means of an extensive research & development program in the nineties. During a float-over a deck is transported to its final destination (on the open sea) and placed onto jacket. The pontoon is manoeuvred in-between the jacket and water (ballast) is taken on in a strictly controlled and exactly dosed way so that the deck is slowly lowered and placed onto the jacket with great accuracy. The margin is seldom more than a few centimetres, thus high precision work! Van Heck has successfully completed a considerable number of float-over projects.

A unique advantage of load-outs and float-overs using the Van Heck method – because it is containerised – is the speedy and economical mobilisation from The Netherlands and Singapore of the ballast equipment. During the past year Van Heck’s ballast systems have been deployed from Dubai to Norway, entirely or partly via partnerships under the supervision of Van Heck. 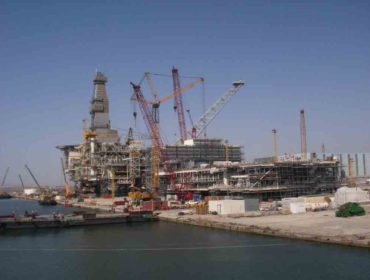