Going to rescue a capsizing giant in open waters

Going to rescue a capsizing giant in open waters.

A successful operation on board the MSC Napoli! Thanks to the pumps supplied by Van Heck, it was possible to re-float the well renowned containership, after it ran aground off the southern coast of England in January. Things are finally beginning to move forward, thanks to salvage workers who have been working busily for six months on the stranded giant, which experienced engine failure during a violent storm, listed and ran aground on a sandbank.

The 62,000 tonne ship, which had approximately 2400 containers on board, was on its way from its home port of Antwerp to South Africa when it ran into trouble. Some two hundred containers (filled with goods including wine casks, nappies and car engines), with a value of hundreds of thousands of euros, were lost overboard and later washed up on the shores of England, where many of them were plundered.

Only after all of the remaining containers had been unloaded one by one from the ship onto a pontoon could operations to ‘patch up’ the 22 meter deep Napoli get underway and let an engineer from Van Heck get to work. Special Van Heck equipment had to be brought back from Singapore and France in order to perform this task on the open seas. After the pumps had been installed in the various holds, engineers were able to re-float the MSC Napoli before the high-tide struck. Salvage workers then noticed that the damage was more serious than they originally thought and decided that the ship could not be brought into port in one piece. Explosives were used to break the ship in to two sections whilst it was still out at sea. 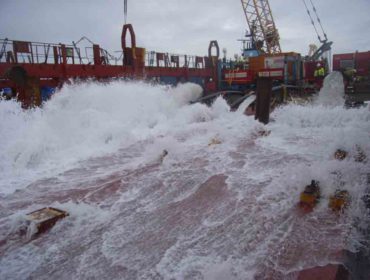