Van Heck does its bit to generate wind energy

The Netherlands isn’t the only country with high expectations for generating offshore wind energy. Our neighbours Germany, Belgium and the United Kingdom are also setting their sights on this promising energy source. Spatial restrictions on the construction of large land-based wind turbines are making it more attractive to build these super turbines out in the North Sea. Pump specialist Van Heck is involved in some major projects. Managing Director Jeroen van Heck reckons it’s an interesting growing market.

Van Heck began its involvement in wind farm construction in 2006 with the building of the Egmond aan Zee wind farm. As a specialist in the offshore industry, the company has been a reliable partner for large dredging firms like Jan de Nul, Boskalis, Van Oord and De Boer for some time. For the first large-scale wind farm off the Dutch coast, Van Heck applied a bright technique to lay the many kilometres of cables needed to connect the turbines to land. This ‘jetting’ of trenches in the sandy soil proved highly effective. A trench was excavated under high pressure in the seabed to enable the cable to sink directly into it. Van Heck used its heaviest ‘silent’ pump for the job. The job was completed by the combination of a hydraulic underwater pump fitted with the Van Heck Powerpack. In 2008 the company was able to repeat this trick off the coast of the German Wadden island Borkum, where the Alpha Ventus wind farm will be rising from the waves in the next few years. The first six 5 MW turbines are already in place, supplying electricity onshore. A further six turbines are in the pipeline. In view of the company’s proven expertise in this area, Managing-Director Jeroen van Heck expects to be able to apply this technique, which was developed in-house, more often. ‘Renewable energy has really got the wind in its sails, especially now that EU governments are gearing their policies towards the expansion of offshore wind energy. We’d like to use our specialized knowledge to contribute to that.’

The Belgian company Dredging International recruited Van Heck for the construction of a large wind farm off the Belgian coastal resort of Ostend. The towering turbines are now in position on a sandbank approximately 30 kilometres offshore. In this case, Van Heck didn’t dig the trenches, but instead used its SC350 pumps to sink the hollow bases on which the turbines stand by filling them with water. They were then also filled with sand to provide extra stability. ‘It’s the first time this technique has been used,’ says Van Heck. The pumps took no more than 1.5 hours to fill each base. Now that the pilot with the first five turbines has succeeded, the aim is to build another 55. When that has been done, some 300,000 households will benefit from the wind energy of C-power. 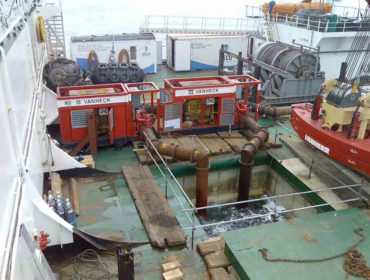