During the Pentecost weekend, Heijmans replaced a steel railway bridge, including abutments and foundations, at the Zeedijk in Culemborg. To achieve this the water channel had to be completely closed by means of dams for the duration of the project.

Two-way pumping through one pressure pipe

Using four diesel driven silenced HK500 pumps (7000 m3/h) Van Heck diverted the watercourse. Per two the pumps were set up parallel and placed on specially constructed platforms. The pumping units were equipped with automatic level switches and GSM failure detectors. Water had to be pumped in two directions so that the surrounding fruit farms continue to sprinkle their crops during the frost period. The pressure pipeline was constructed under the bridge so that the railway track could stay open as long as possible.

During the replacement of the railway bridge, the track had to be diverted temporarily. The project team ensured, with efficient working procedures, that the track would be operational again within 70 hours.

Dams and pumping units remained on site longer than planned to pump additional water. It is expected the project will be completed by the end of May 2016. 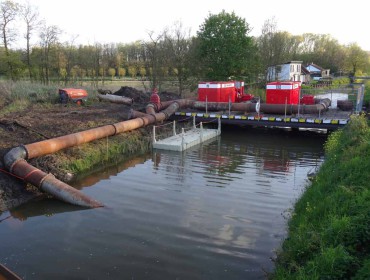 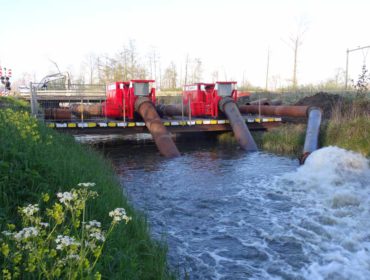