Summer 2013: a time of great suffering. Rainwater and meltwater accumulated in Germany just south of Magdeburg where the Elbe and Saale converge. The water management authorities there were already customers, and Jeroen was nearby so that he could discuss matters with them quickly. When a dyke running along the Saale broke, it was decided to call for assistance and he quickly made a list of what was needed. Within one day, the pumps were on site and work could begin.

The locations at which the pumps had to be installed were difficult to reach. An army amphibious vehicle drove in front of the crane and a loader-shovel pulled the trailer carrying the pump. The trailer was almost submerged in the flood water. The first crane didn’t make it through, and a bulldozer got stranded once, but the pump reached its destination. Jeroen: ‘It looked like something out a book that a 10-yearold boy would read: the army with its troops, amphibious vehicles, helicopters dropping in sandbags, a dyke blown up by explosives… and there were our red pumps manoeuvring among everything.’

Jeroen: ‘The major difference between this and the disaster situation in England was that we had great weather this time and had plenty of room to install the pumps so we didn’t need very much preparation. The places where the pumps had to be located, however, were sometimes harder to reach. We also received more help from the local population who leant us their assistance. In England, it is standard practice to leave this up to the professionals. Both disaster situations gave us the feeling that what we were doing was really helping. I can still recall the gratitude of the local people. These were really exciting projects!’ 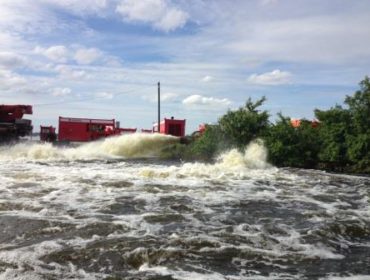