When the going gets tough, the tough get going

The task currently facing Van Heck in the Brazilian port of Sepetiba is certainly not an easy one, but it is a challenge. So we rolled up our sleeves and went off into the swamps to pump off the excess water, using our high capacity pumping units. The boggy soil and the fact that the area frequently lacks any efficient infrastructure, makes this mission in South America a logistical nightmare both for man and machine.

This swampy territory with it’s sweltering combination of heat and humidity is also full of poisonous snakes and other exotic species. Our equipment was sometimes delayed at customs longer than the time it took to ship it. Working at this location, approximately 30 kilometres south of Rio de Janeiro, is not exactly a walk in the park. However, the setbacks we have experienced on the way have only encouraged Van Heck even more, to deliver a top performance.
At the beginning of the year the Frisian experts were called in by Dredging International and Boskalis (DEME Brazil Joint Venture). Our client has the responsibility of dredging Sepetiba, one of the six most important seaports in the state of Rio de Janeiro. Dredging is also being carried out to create a turning bay for large shipping vessels. The purpose of these operations is to clear the way for the expansion of the port with a huge steel factory including a separate ore terminal, to be built in Sepetiba for German steel giant Thyssen Krupp.

Preparations are in full swing and Van Heck is taking responsibility for the processing and drainage of spill water. Over the past few months, all of the equipment has been set up and our own engineers have already been to the site a couple of times in order to check on the situation and train the local workers who will soon be able to help with maintenance. The team from Noordwolde encountered problems right from the start. Jeroen van Heck:` How do we get there with our daily supply of Diesel? You can’t even get there with a tracked excavator. There aren’t any access roads, so our pumps units sank into the soft ground. This road has now been built. Other hurdles were overcome too. The pumping units had already proved themselves in extreme conditions. ‘All of the units are resistant to high temperatures of 50 degrees Celsius. Under tropical conditions such as these, you need an enormous cooling capacity.’

The expansion of the Sepetiba port is expected to take at least another year. The pumping of spill water is a continuous process, so the men and machines of Van Heck will remain working in South America for the time being… 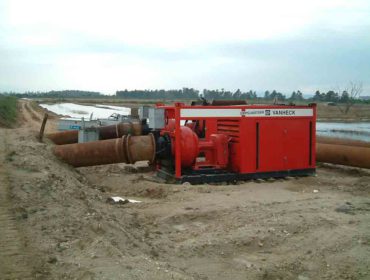