During cleaning operation in Leiden’s canals, the disturbed bed of the Mare- singel was found to be so severely contaminated that the pollution was detected several kilometres downstream and local residents were complaining about the noxious smell.

Some fish were also poisoned. Clearly, the canal had to be dammed off urgently to prevent a further spread. There was a complication, however, and that was the E-on power station located on the banks of the canal that had to be able to continue discharging its cooling water. The only solution appeared to be to divert the cooling water away from the facility by pipeline and discharge it further up the canal ring. On August 5th Van Heck received a call. Using Google Earth, the planners had estimated the distance over which the waste water had to be pumped. The same night, Van Heck loaded its lorries with pipe sections and pumping installations, and completed the entire operation within just two days. A quick response, careful planning and adequate on-site action are decisive when such calamities occur. The rescue operation made it possible for the power station to continue supplying electricity, which was vital in August, when temperatures were high. 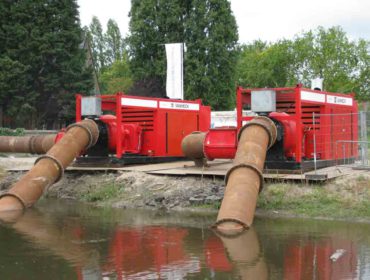