A cool head in Baku, in ‘The Land of Fire’

Even in Baku, in ‘the Land of Fire’ (Azerbaijan), the Van Heck professionals kept their heads very cool. Under the authority of Saipem, a float-over operation was completed successfully under complex circumstances. The immense ballast operation went by flawlessly. It did not pass by unnoticed: Van Heck got an order for another 5 decks off the coast of Baku until 2007.

The time pressure was enormous in ‘the Land of Fire’, as often is the case in offshore projects. But in this case as well as in others the Van Heck team could manage the job thanks to its expertise and improvisation capacities. Van Heck had a worldwide scoop because of the integration of the ‘Dynamic Ballast System’ into the ‘Centrally Controlled System’. As a result, 4 inlet valves located on the side of the pontoon could be controlled. This led to a higher pace and more control during the installing of the deck. This float-over operation became a success story partly due to this innovation by Van Heck. The intensive preparation, the engineering and testing proved their value. A difficult feat pulled off by Van Heck.

It meant a true challenge for the team that was flown in from the Netherlands, but the platform (15,600 tons transported on a pontoon the size of several football fields) ended up on the jacket accurately to the millimetre. The team especially received many compliments for putting the immense monster in its place in only 3 hours, while the schedule anticipated a 4.5 hour operation. Although operations like this one in Baku are prepared inside out, and are calculated up to the tiniest details, in the end it always comes down to experience and the inexplicable “fingerspitzengefühl”. Circumstances at sea are never the same, weather types vary, the tide is inimitable, and the participating teams (in this case among others Azeri, Russians and Italians) are always different as well. Apart from that and in spite of endless calculations in order to keep the mastodon balanced, the COG (Centre of Gravity) is often not as accurate as predicted. Creating order in that chaos and maintaining sight on that one goal: the safe delivery of the multimillion cargo. That is what Van Heck’s men stand for.

In ‘the Land of Fire’ Van Heck – also specialist in ‘Load Outs’ – once again lived up to its reputation. Just like often before during complex ballast operation in all corners of the world. 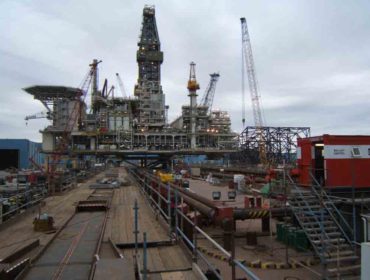