At around 23:00 Sunday evening (13.10.2013) Van Heck received a call that Waternet required assistance in reducing the high water level in the Horstermeer polder after heavy rainfall. Within 2 hours the first man was onsite to assess the situation. After inspection the list of the required material was sent to the people waiting at Van Heck who prepared and loaded the truck in the early hours of the morning. At 08:00 a crane was set up and the silenced DPPG320-HK500 pump with pipework arrived and assembly could begin. Two Van Heck supervisors and Waternet personnel worked quickly to place the pumps and route the Ø450mm piping to the discharge point. The pump was up and running by 12:00, pumping 4000m3/h to relieve the situation. Believing this to be the end of the story the Van Heck personnel returned back to Noordwolde, with thanks from Waternet for their speedy assistance.

On Tuesday evening however the telephone rang again, asking for assistance in a different location, this time by lock ‘Pondskoekersluis’. Once again a man was sent ahead to assess the situation and make the right selection of equipment to get the job done. Personnel at Van Heck worked quickly to get the electrically driven VP800-160kW pump loaded and ready, along with the pipe work while the man onsite readied the crane, lighting, generator and not to forget, coffee. At 03:00 the installation operation started by lowering the pump into the lock, followed by mounting of the pipework. All went well and the pump was operational at 08:00 the following morning, pumping 7500m3/h.

The day didn’t end there. The pump DPPG320 – HK500 installed on Monday had lowered water levels sufficiently by the Horstermeer polder and Waternet asked if the pump could be relocated, to ‘T Hemeltje Sluis, a lock close by to the Horstermeer polder, to help the situation there. After a quick assessment the go ahead was given and the Van Heck team set about disassembling the pump and piping and loading it up for transportation to the new location. With this done and a well-deserved brunch, they moved to ‘T Hemeltje Sluis and started positioning the pump next to the lock. By 18:00 the pump was up and running again pumping 4000m3/h into the lock. The team once again returned to Noordwolde with thanks from Waternet for the excellent, speedy service.

Van Heck has since then been approached by Waternet to make ‘emergency plans’ for a key number of pumping stations in their region. The first six plans have been ordered in 2013 and another six will follow early in 2014. Waternet think that in total 20 stations require plans to allow the quick installation of temporary pump capacity, should unforeseen situations arrive. 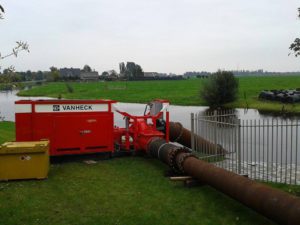 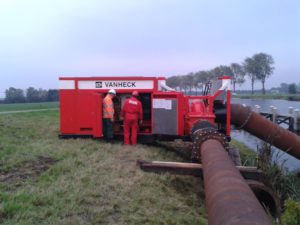 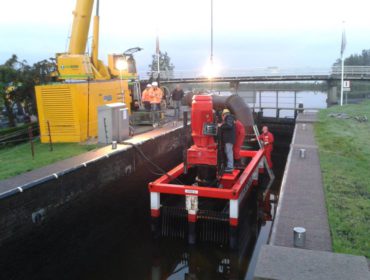