For the past year Jeroen van Heck had been thinking about the future of his 58-year-old company.
There was no successor in his own family. “I spoke to some big companies in the market. The company could complement the work of a large dredging contractor. But would that positive for Van Heck?
Continuity is a key word for Van Heck. This is where an entrepreneur should be at the helm, not a spreadsheet manager.”

Jeroen van Heck found a true entrepreneur in Herman van Dijk. Herman van Dijk worked in mechanical engineering in England for decades. In addition, he and his company Van Dijk Coating spent many years in the oil industry with the preservation of underground pipelines. Due to this experience, Herman van Dijk is no stranger to working with the big contractors “out in the field”. After selling Van Dijk Coating, he missed leading a team. Jeroen Van Heck and Herman van Dijk have known each other for decades and the men like to philosophize about all sorts of technical things over a beer. Jeroen van Heck saw Herman van Dijk as the ideal technical manager for his company, but he did not yet think of selling the company. After a brief introduction to get to know the company, the decision was quickly made.
The rest is history; The Van Heck Group is now owned by Herman van Dijk.

Jeroen van Heck will certainly stay in touch for technical support in the coming year. “This support is necessary until I can swim myself,” says Herman van Dijk.
The company remains based in Noordwolde and the name remains the same. Herman: “Van Heck stays; It’s a world-renowned brand name, you don’t remove it from the facade, do you?” 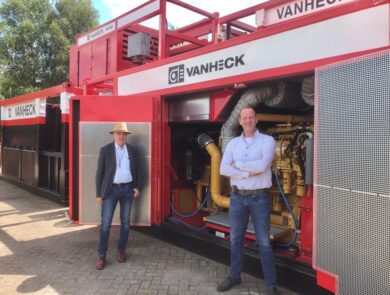